Broadly, I am interested in the interaction of meaning, structure and context across different languages, in connection with language acquisition:

– Cross-linguistically, how does meaning interact with syntactic structure and pragmatic context?

– Does the interaction simplify or complicate the task of acquiring meaning?

– Are solutions to the acquisition of semantics that draw on pragmatics and syntax general enough to deal with the cross-linguistic differences?

What does "whanything" mean? Semantics of Mandarin *wh*-words and their acquisition

Mandarin wh-words (e.g. shenme “what”) can function as question words (like English what) or indefinites (like English any, Cheng 1991 a.o.). I explore the acquisition of the indefinite meaning (joint work with Daniel Goodhue, Valentine Hacquard, and Jeffery Lidz), and find that three-year-olds are sensitive to this ambiguity. I also use corpus data to show that the indefinite interpretation is not a Negative Polarity item (contra Lin 1996 among others) but a modal indefinite (joint work with Liu Mingming). 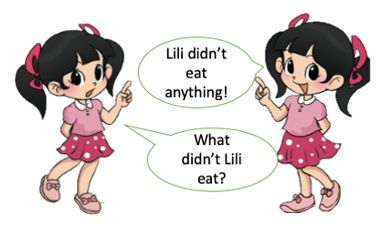 Many languages have devices that affect the default discourse effects of certain speech acts. In this proj, I discuss the effects of the Mandarin discourse particle “ba” on questions and assertions. This particle appears to weaken the forcefulness of assertions, but it has been claimed to have the opposite effect on questions, making them more forcefu– “you must answer this question”. I will discuss new data showing that ba-assertions are not always ‘weak’ and ba-questions are not stronger than unmarked interrogatives in the same context, which is not explained by current theories. I present a unified account of “ba” in a commitment-based discourse model (Farkas and Bruce 2010). I propose that, uniformly, “ba” signals that the speaker does not undertake any new commitments (so its only effect is to steer the conversation) and that the ‘weak’ and ‘strong’ contrast comes from the requirements that ba imposes on the previous discourse.

Preschoolers tend to fall prey to false belief errors and reject think-sentences like (1) when the complement clause is false. However, Lewis et al (2017) show that making beliefs salient by introducing two characters (e.g., Donald vs. Minnie) with conflicting beliefs improves three-year olds’ performance significantly. We that the same manipulation does not help Mandarin-speaking children with juede “think”.

How exhaustive meaning is conveyed in cleft sentences?

We used three experiments showing that Mandarin shi…(de) clefts encode exhaustivity as part of its presupposition, which is different from zhiyou “only” and answers to constituent questions. We also show that 6-year-olds have problem interpreting this exhaustive meaning in clefts, but not the other exhaustivity-inferring constructions.